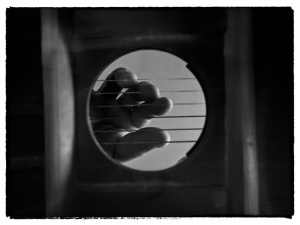 “Birth Of The Tone” Camera: GoPro Hero 3, edited in Lightroom and Photoshop

In another blog post, I wrote about how your images might just speak to you. As a consequence, you just might overrate your images and I also wrote about you’d have to disconnect from your images to avoid that.
Judging your images also works the other way — you might not realize how good your images really are. You might not see them for what they are and not totally appreciate their emotional depth.
But maybe all you’d have to stop doing is what you may have needed doing when you were overrating. Compare.
I did realize this doing a mindfulness exercise. All I was doing was trying to be in the moment and just thinking about the things I was doing or experiencing right then. Without judging.
But it was only this last time I was doing the exercise that I realized not to judge also meant not to compare, meaning putting it into relation to something else.
In my case, it was the image above. I had the idea and so I went and put a GoPro and two battery-powered bike lights in a classical guitar. I could see the composition and finally take the shot using the GoPro app on my iPhone.
Of course, the camera was too close to the sound hole and the strings and so they were not in focus. And the GoPro could only shoot in JPEG so I didn’t have the data to work with had I been able to shoot in RAW.
Anyways when I took the images to Lightroom and developed the best one using Lightroom and Photoshop, I came up with something decent that had a certain charm.
But as this was a part of an assignment, I felt that on delivery I had to explain that this would be just a proof of concept and not “the real image”. I also showed this to a friend whose opinion I really value and he also said that though he liked the idea, it was less than perfect and he’d loved to see me work further on the idea. So I thought I had been right to not fully back up my image when I delivered it.
I was surprised to hear the reaction to my delivery — the image was described as interesting, remarkable and creative in its own right. Maybe I hadn’t been wrong liking it after all.
The thing is that I shouldn’t have compared it. Not to anything I’d done before or anything else. I had an idea and as technically imperfect as the image is — it is interesting indeed. The way I went about to take it was creative as the idea itself was, to begin with. All I had to do was look at it and what I had done and to see just that. Doing that I would have found out that I liked the image and the process of making it. And that what it conveyed, the emotional impact it had was more significant than the lack of technical perfection.
That doesn’t mean my friend was wrong. I already thought of a way to take this image with my DSLR, shoot in RAW, have it in focus and all the good stuff. But although I know I will probably like this image I have yet to take, it will be different not only from a technical point of view. It will set a different mood, will tell a different story. And most important of all — it will not replace this image.

View all posts by Holger Mischke